“Expect the unexpected” is an axiom that has become a way of life around the farm.

Last weekend I ordered a pallet hay spear and 3 point hitch spear for our new tractor and planned on this weekend moving the 40 round bales being held for us by a neighbor.

Everything going as expected, and then the unexpected. The neighbor called on Monday to let me know that he would not have any hay for us this year.

After the disappointment (perhaps accompanied by a slight tinge of anger) subsided, I began scurrying the Craigslist classifies to find what was still available in our market. After several desperate calls, we were able to locate 40 4×5 bales of second cutting grass hay just 10 minutes from our house. Then the unexpected, he can’t deliver.

My wife sprang into action and called her Kentucky kin and fortunately we found a double axle trailer to pull behind my 2007 Dodge Ram with nearly 200,000 miles. In this case expecting the unexpected that my truck would break down while moving the hay.

We drove down Friday to her fathers home and there was the trailer which was not quite what we expected. The unexpected once again. One look at the trailer and I knew that we were looking at two days of moving hay.

The pallet fork hay spear arrived as expected on Thursday. Friday I mounted on our RK37 as expected (thank God for quick release setup). 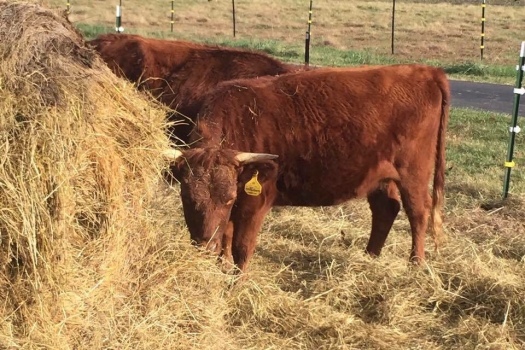 This past Saturday we started moving hay and after seven trips and 10 hours, we got it all moved six bales at a time. The hay supplier was wonderful and we actually ended up with better hay and saved $5.00 per bale. Better yet we have our hay reserved for 2019. Unexpectedly my truck did not break down and I managed to unload all 40 bales unexpectedly without injuring myself or anyone else.

The cattle have different expectations and never really account for the unexpected. Somehow we managed to meet their expectations… hay…hay…hay!